This will pretty much be about video game-related things that are either weird, interesting, or can't be explained. If you would like to contribute something, or have a question, comment, or opinion on my writings below, then by all means send me e-mail. 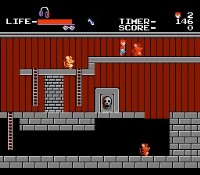 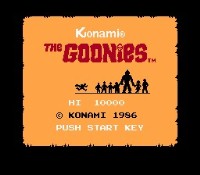 THE GOONIES I? Ever wonder why when you bought The Goonies II in 1987, why there was no Goonies I? I always assumed by "The Goonies II" they meant it was just a sequel to the movie. Well, not known to most, Konami released a Goonies I in 1986 - In Japan. It is very much like the second one, right down to the music and similar title screen (part I scrolls from right to left, while part II scrolls from left to right). Only in this one, Mikey has a karate kick, bombs are used far more often, and the graphics are not as good. So, why did it never make it to the US? Probably because Konami wasn't producing American NES games in 1986, and by the time 1987 came around, part II was ready for release. Then again, maybe it didn't meet Konami's standards of excellence (after all, they never released a lot of their Japanese games in the states, such as Antarctic Adventure and Pooyan). Who knows...

MYSTERIOUS CRYSTAL IN BREAKTHRU In the very first level of this easy to beat 1987 NES game, there is what appears to be a crystal ball in the cave. But if you drive into it you crash, and you can't destroy it either. What is it?!? I would love to hear your opinions on this, or better yet, talk to the person responsible for putting this in. In the meantime, just check out the picture to the right and see for yourself.

CONTRA DIFFERENCES? I heard a while ago that the Famicom version of Contra is different (and supposedly better) than the NES version. Anyone know in what way?

KUNG-FU IS TOO SHORT Why was the arcade game Kung-Fu Master shortened to just Kung-Fu when it came to the NES? Afterall, it is the same game.

DIFFERENT BUT THE SAME Wonder Boy for the Sega Master System and Hudson's Adventure Island for the NES are so similar that something is strange indeed. A company could easily have sued and won because their game came first, so I'm gonna assume they are related. Did some company own the rights to both games? Was a secret deal made? Come on, I have to know these things! :) While I'm on the subject, Monster Lair for the Turbo Grafx 16 CD-ROM (a game where my name appeared in Electronic Gaming Monthly for which I hold the highest score in, not that I'm bragging, nah...) also is very much alike, yet Wonder Boy II and III look like totally different games. Hmm... Then there's Sega's Space Harrier, which is almost exactly like 3-D Worldrunner for the NES. If I live to be 100, I'll never give up my quest to get to the bottom of this.

WAS GHOSTBUSTERS THE FIRST PASSWORD GAME? Was this old Sega Master System game the very first video game cartridge ever to use the password system (at least in the US)? I have reason to believe that it is, and no one ever gives it credit for it's huge landmark. While I don't know exactly when in 1987 it was released, I bought it in April of that year. Metroid and Kid Icarus, the first password NES games, didn't come out until late in 1987. On a somewhat related note, The Legend Of Zelda (July, 1987) for the NES has got to be the first game ever to take advantage of the battery backup feature still used in cartridges today.

LJN GAMES DON'T LOOK LIKE THAT! Go dig up an old Nintendo Fun Club magazine and check out LJN's original ads for their first five games (Gotcha!, Jaws, Town and Country Surf Designs, Major League Baseball, and The Karate Kid). The pictures in the ad look nothing like the actual game screens. In fact, they look way better. Was this meant to rip off consumers, or were these prototype shots? Since all five pictures look different and better than the real versions, was something fishy? The world may never know.

EMULATORS FOR SYSTEMS ARE OUT OF STYLE? I always found it very strange that when the Super NES came out, there was no NES emulator for it. Then when the Sega Saturn came, not a hint was heard of a Genesis emulator. Finally, there are, correct me if I'm wrong (and I know you will), no plans whatsoever for a SNES emulator for the Nintendo 64. Am I missing something here? The only emulators this decade has brought us are the Master Gear (play SMS games on your Game Gear) and the Super Game Boy (play GB games on your SNES). It makes no sense to me.

MORE THAN MEETS THE EYE A Transformers game came out in 1986 for the Famicom, but never for the NES! Since Transformers ruled in the 80's (and forever in my heart) as a cartoon, toy, and comic book, it is a national outrage that it was never released in the US! Grr!

OUT OF THIS WORLD Out Of This World (called "Another World" in Europe) has appeared on many systems (computers, Super NES, Genesis, Sega CD, 3DO, and possibly others), and rightly so. It really is a fantastic game. But did you ever beat it? I did (the 3DO version), and the ending leaves you hanging. Your character (Lester Knight Chaykin) is badly injured, but manages to save his alien buddy. Your bud puts Lester on a flying dragon, they fly away, land, and the alien puts Les down. Then he starts kicking major butt (fighting bad aliens and freeing slaves). Finally, he lays Les down on a table and thinks back to the time he first met him while trapped in a cage. Then it ends. Then what?!? I hate being kept hanging on!

BERZERK FACE EXPLOSION Ever notice how in the Atari 2600 version of Berzerk, the robots always explode into a face (if you look real quick) similar to Evil Otto? I'm going to assume this was to save on programming (since the face was already being used for Otto) space, but who knows.